“Luck, in my opinion, is the tail wind.”

We were working on a different business plan before setting up Urbanclap. Initially, our idea was based on travel, entertainment, movies and so on. We were looking at a screening services business. While, it was not a new idea, it was quite powerful. What I would consider lucky for us was the decision that we took, to not go ahead with it. After a few conversations with production houses we understood that they were not in favour of this business idea. While our idea could have morphed into a good lifestyle business we set out to achieve more than that. We wanted to build a business based on a disruptive idea. Subsequently, we set up Urbanclap, an online platform that helps you find the right service professionals for activities that are important to you. We have SAIF Partners, Accel Partners and the founders of Snapdeal as our investors.

Yes, luck exists, but you don’t become the CEO of a company because you’re lucky. That takes sheer hard work. Luck is a catalyst as long as you’re on the right path. Luck, in my opinion, is the tail wind.

Thomas Jefferson said: “The harder I work; the more luck I have.”

You can plan to succeed. And, if you work hard enough for it, you’ll get it sooner or later. If you’re lucky, then sooner, if you’re less lucky, then later. 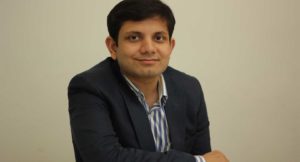